Technology and Democracy – two words which, a decade ago, most people would not have used in the same phrase. Today, it is probably not an exaggeration to say that whenever someone mentions the word democracy – and especially elections – it is almost always accompanied by mentioning the role of technology. But what is the role of technology in today’s democracies? What is its impact? Is there a complex interplay between technology and democratic processes? In this article, I would like to take you through the new world – a world where technology is shaping up the realities of not just businesses, but also politics and society as a whole.

The use of various social media platforms – including Facebook, WhatsApp, Instagram, Twitter – for election campaign is not a new phenomenon. What is new is the change in role that social media is playing today in elections. It is no longer restricted only to campaigning but has evolved into electioneering. Elections are contested, won or lost on the social media battlegrounds – with giant corporations playing a significant role.

From ‘Brexit’ to Trump’s 2016 Presidential campaign to the 2019 General Elections in India – all are a testimony to the influence of social media platforms over democracies – and in particular, how they have been used to subvert every democratic process.

In hindsight, when we look at the Indian General elections of 2014, they were very different from the preceding elections. It was for the first time that internet as a medium was also crucial in deciding the fate of the contestants in at least 160 parliament seats. The availability of the “smart phone” in the 2014 elections was limited to the rich, urban middle class and rural elite. And 2019 was vastly different from 2014. For the first time, it will be safe to assume that more than 50% of the electorate who voted have had access to internet and are on some form of social media. With more than 350million Indians on Facebook and an equal number on WhatsApp, the role of social media was undoubtedly significant in this elections.

Manufacturing Consent and Hate Speech (only if you have no tie-ups!)

It is already known that both BJP and the INC have tied up with Cambridge Analytica in the past, and multiple news reports point to their tie ups with other such companies which provide similar ‘services’. This might have included a direct tie up with Facebook itself, since Facebook had already made such deals in the past. The Time, in an article in August 2020, points to one such deal with BJP – and how Facebook had a different set of rules to determine ‘hate speech’ when it comes to BJP. And it is important to state again that Facebook owns two other major platforms in addition to its social networking site – WhatsApp and Instagram.

With the ownership of large amounts of data, Google and Facebook can change the perceptions of people towards a particular political regime. Cambridge Analytica, a British Political consulting firm, was involved in inappropriately acquiring information of more than 50 million Facebook users while working on Trump's 2016 presidential campaign. It was involved in influencing the voters to vote in favour of one presidential candidate in the US.  According to Associated Chambers of Commerce and Industry of India (Assocham) report of 2014, political parties typically spent close to 30% of their expenditure on advertising.  Which would have only increased further today – increasing the influence.

The use of money power to influence and manipulate the voters is made easier with the ‘features’ on offer from WhatsApp and Facebook – from Dark Posts and A/B testing to API based messaging with no limits, the ability to ‘manufacture consent’ at a scale that is unprecedented is in the hands of corporate giants – and political parties which are tied to these.

People have used social media to come together and organise themselves into communities with various profiles. Facebook and WhatsApp are the platforms where such categories exist followed by Google, Twitter and more. People are organised into groups which range from school, college, association, religion, caste, family, neighborhood, workplace, hobbies, passions etc. Facebook already has the information of people’s behavioural aspects, including their spending patterns, their caste and the class to which they belong. All the documentation and analysis of people is done using AI and automation tools. The algorithms of these platforms consistently update the profiles of these individuals from the day one has got on to these platforms. They gauge the moods of people, analyses the shift in thinking patterns etc.

With the availability of the behavioural patterns of individuals and their profiling, now a targeted message broadcasting to the individuals based on caste, religion, region etc is possible. The concern is the lack of any effort from the Election Commission to monitor or check these methods that would only entail in subverting the democratic processes. Facebook claims that they are in touch with Election Commission and are going to be partners in the campaign of making people vote. The same feature where individuals have marked safe during natural calamities can be used to make people vote. Here is the question: Is Facebook not going to take money from political parties or corporations to ensure that such pop-ups appear to voters who probably might vote for a particular party? The very business model of Facebook, Google and other social media is to sell the behavioural patterns of individuals and even their private aspects for advertising.

The bottom line is that these giants have the technology to subvert the Indian elections to favor a political party and regulate the reach of any other party for a price. The Election Commission of India has not given any clarity about how to deal with this new situation - there are no measures to deal with digital platforms. In fact, there is a clear lack of regulation of these digital platforms across the globe when it comes to the point of elections. Technologists across the world should come together in ensuring that in the name of studies, experiments or business, these oligopolistic digital platforms should not be allowed to influence the electoral process in any way.

Oh, how do we do that, you ask? A good start would be to logout of Facebook and login to FSMI.SOCIAL – and ask your friends and family to join too! That’s a first step. A step towards protecting the democratic processes. It’s a long way to go, but every destination is reached by taking the first step. 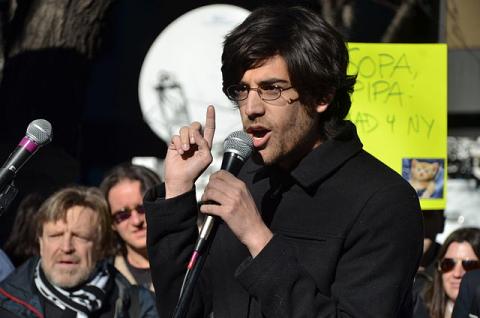 Open Scholarship is made possible with Free Software